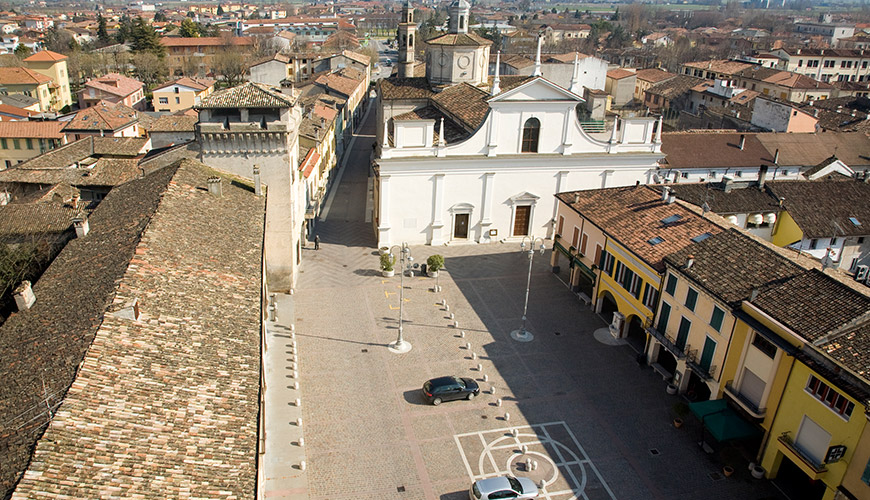 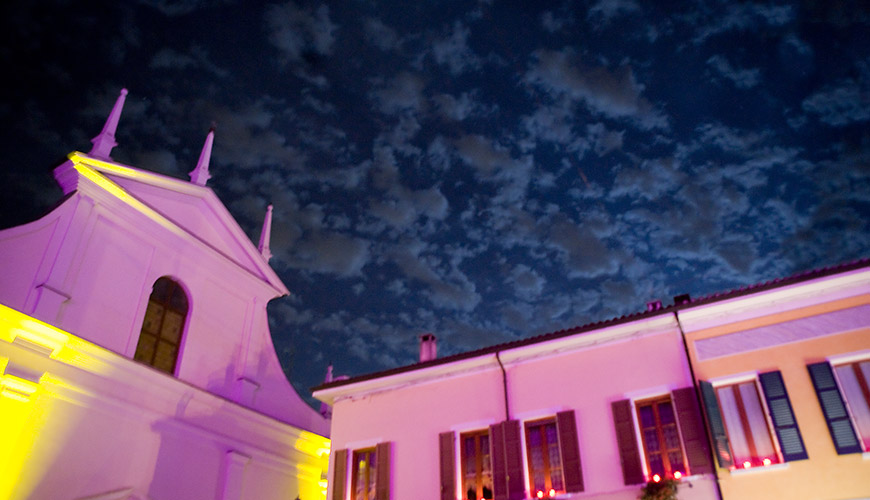 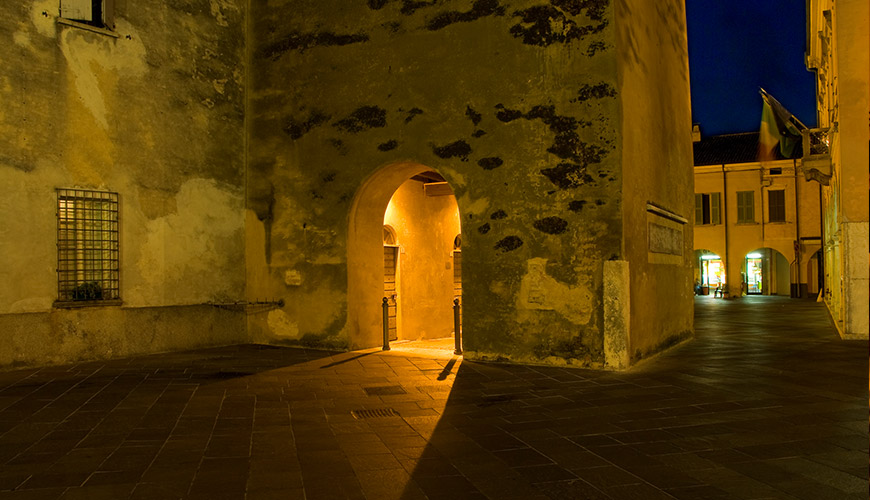 The area of Castel Goffredo, inhabited since the Bronze Age, was affected by both the Etruscan colonization and the Roman civilization, as evidenced by numerous archeological findings. Stone fragments of the Lombard period (seventh century) are clear signs of an early Christianization. Traces of Carolingian sculpture are present in the hamlet of Bocchere.
In 1107 there is the first mention of Castello Vifredi as urban center. Between 800 and 1115 the city belonged to the county of Brescia. In 1337 it was under the protection of Gonzaga. After been dominated by the Visconti (1337), the Gonzaga (1337-1348), the Visconti again (1348-1404), the Malatesta (1404-1426), the Republic of Venice (1426 to 1431 and again from 1439 to 1441 ) and finally by Gonzaga (starting from 1441), in 1466, under Alessandro Gonzaga, Castel Goffredo became the capital of a small independent fief. During his marquisate, the village got larger and the construction of the second wall began. In 1511, with Marquis Aloysio Alessandro Gonzaga, the cadency of the “Gonzaga of Castel Goffredo” was born. In Gonzaga – Acerbi Palace, he created a refined court, attended among others by poets Matteo Bandello, Lucrezia Gonzaga and Pietro Aretino, artists and diplomats. After his death, his eldest son Alfonso Gonzaga governed wisely from 1549 to 1592, the year he was assassinated by his nephew’s killers. His nephew was Rodolfo Gonzaga of Castiglione, brother of the saintly Luigi (-Aloysius). Rodolfo ruled Castel Goffredo with terror and, in turn, was the victim of a popular uprising that led to his murder on 3 January 1593. With his death the history of the city as an independent fief ended. Castel Goffredo was annexed by the Duchy of Mantua (1603) and would follow its fortunes until 1707, when the power of the Gonzaga ended and the town became part of the Habsburg Empire. In 1796, Napoleon Bonaparte defeated the Austrians and the next year Austria gave up Lombardy to the French. During the Risorgimento years, Castel Goffredo became the anti-Austrians conspiratorial center in all the Upper Lands of Mantua. Among the many patriots from Castel Goffredo, the most remarkable is Giovanni Acerbi, Supply Officer for Garibaldi’s Expedition of the Thousand. In 1859, after the Battle of Solferino and San Martino, that involved Castel Goffredo as well, the city was joint to the Kingdom of Sardinia and in 1861 became part of the Kingdom of Italy. 1925 marks a turning point for the economy and industry of Castel Goffredo: in this year opens the first hosiery, No.e.mi, which will be the starting point for the textile district of the city, developed after the Second World War. Castel Goffredo gained the title of city in 2002.

Only a few women of the town knew the original Tortello Amaro recip... Leggi tutto >>

In Castel Goffredo as in many places in the Lands of Upper Mantua, ... Leggi tutto >>

Wednesday 23 December, in Castel Goffredo, is Shopping Day! It is t... Leggi tutto >>

The ancient fair in Castel Goffredo was established, along with the... Leggi tutto >>

Festivals and fairs Music and theater
﻿

The 2nd of June is the Italian Republic Day, but Castel Goffredo, o... Leggi tutto >>

The International Festival of Classical Music

Tradition has it that in Castel Goffredo on the last Friday of Carn... Leggi tutto >>

Sacred Art in the countryside, the rural oratories

In addition to the Provostal Church of St. Erasmus, in Castel Goffr... Leggi tutto >>

The Provostal Church of St. Erasmus Bishop and Martyr is either the... Leggi tutto >>

The historic centre of Castel Goffredo is regarded by urbanism hist... Leggi tutto >>

The Treasure of St. Erasmus’ Church

The church, rich itself with works of art, is home to the Treasure ... Leggi tutto >>

On the northern side of Piazza Mazzini, enclosed between the mediev... Leggi tutto >>