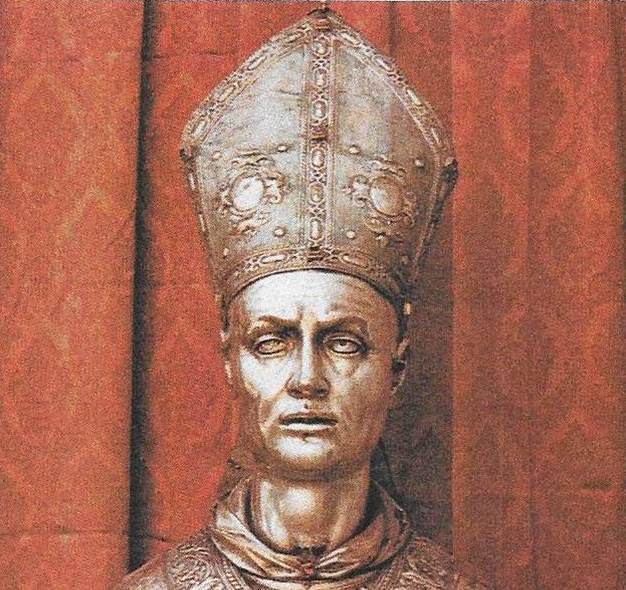 St. John Chrysostom (Antioch, 347) is remembered for its extraordinary effort to promote reconciliation and communion between Christians of East and West. Its worship spread throughout the Christian world and Asola has chosen him as its patron as an alternative to the previous Saints Faustino and Giovita (1788), the saints of Brescia to which Asola was politically linked. John Chrysostom is honored in Asola with a rich chapel erected inside the Cathedral between 1690 and 1692 by the will of Redone. The peculiarity of this chapel, which has increased the devotion between the community, is the presence of the relics of St. John Chrysostom: his jaw. For his oratory and the number of his homilies (more than 600), from the sixth century he is called with the epithet of Chrysostom, or “Golden Mouthed”. The relic is kept inside a silver coated copper bust that was made in 1605 by a Milan workshop. Under the icon on the altar, in fact, is the Latin inscription which reads: “In early September of 1722 the public devotion moved here and laid the treasure of Asola, the relic of St. John Chrysostom.”

Asola celebrates its patron on 27 January, the anniversary of the return of the body to Constantinople (438).

The feast is preceded by triduum. Three priests linked to Asola (they were Asola priests or are from Asola) are invited at the celebration, as well as the mayor. St. John as well as being the patron of our church is also the patron of the city. Before Mass the sacellum is opened. The opening is attended by devotees but also by curious onlookers who want to see whether the bust is shiny. It is said that the shine is symbol of a good year. The bust is then exposed on the High Altar.
For some years now, the group of “Christian Russia” have been celebrating Mass: they are Orthodox priests celebrating according to the Byzantine rite. It is a ritual written by St. John himself. In the evening there is Mass and and the procession through the main square, followed by the blessing of the city. Then, the bust is placed back into the sacellum until the following year.

The New Theater Season in Castiglione delle Stiviere is back. Thi... Leggi tutto >>

The museum was established in the early twenties of the twentieth... Leggi tutto >>

On the last week of April, the historic center of Castellaro Lagu... Leggi tutto >>