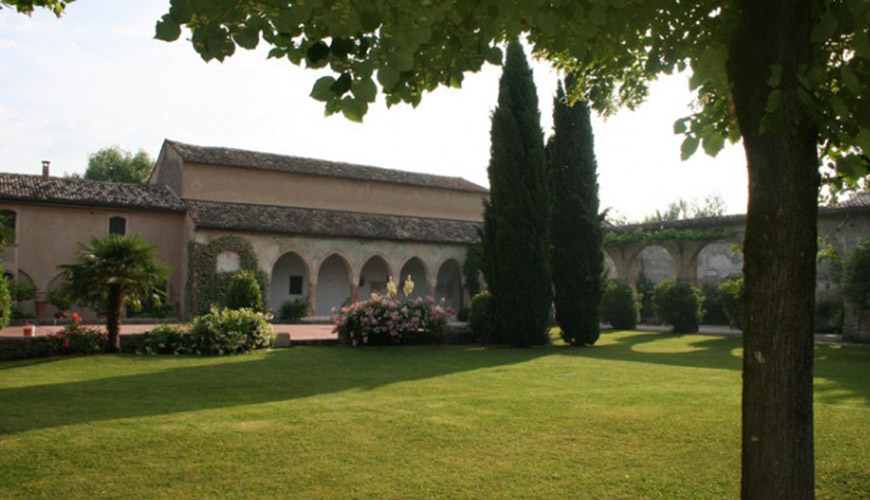 Enclosed within a high wall, about a mile long, the complex is a typical example of late Gothic architecture in Lombardy that still retains the ancient and fascinating atmosphere of convents.
The convent was born from a donation by Guglielmo Luchino Venturella of Castel Goffredo. He offered a private oratory, with house and garden to the Hermits of St. Augustine. Originally, the monastery consisted of a church, now lost, the refectory, the chapter rooms and two Gothic cloisters of which today remain only fragments.
This structure gained importance over time thanks to the Gonzagas conspicuous donations. In fact, from 1467 to 1614 it was home to nine General Chapters of the Congregation of the Lombard Augustinians (Hermits of St. Augustine).
Illustrious people came to this place, including Emperor Charles V, who came to the Castle of Medole for a political meeting with the Gonzaga family and stopped at the convent, donating a precious silver bounded breviary (28 June 1543), and Saint Aloysius Gonzaga, who repeatedly went there to pray to the image of the Blessed Virgin of the Annunciation preserved here. Located on the border between Medole and Castel Goffredo, the convent of Annunciata was later the subject of a dispute between two branches of the Gonzaga family: the princes of Castiglione, and the Marquis of Castel Goffredo, who fought for possession for 160 years. On 12 June 1783, under the reign of Emperor Joseph II, the convent was suppressed.
The ancient building survived only partially. Today are visible the Gothic cloisters, the vaulted halls and the small church, where on 5 November 1885 the bishop of Mantua Giuseppe Sarto, future Pope Pius X, reconfirmed the authorization to celebrate mass.

Built on one of the highest hills of Volta Mantovana, from which ... Leggi tutto >>

The Romanesque church in Medole dates back to the tenth century. ... Leggi tutto >>

The Romanesque church in Medole dates back to the tenth century. ... Leggi tutto >>